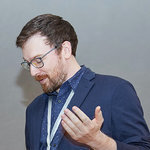 Every Game in This City 200 and 201: From Escape Rooms to Esports and FIFA in a Magical Forest

By Patrick LeMieux, August 27, 2021 in Every Game in this City Episodes